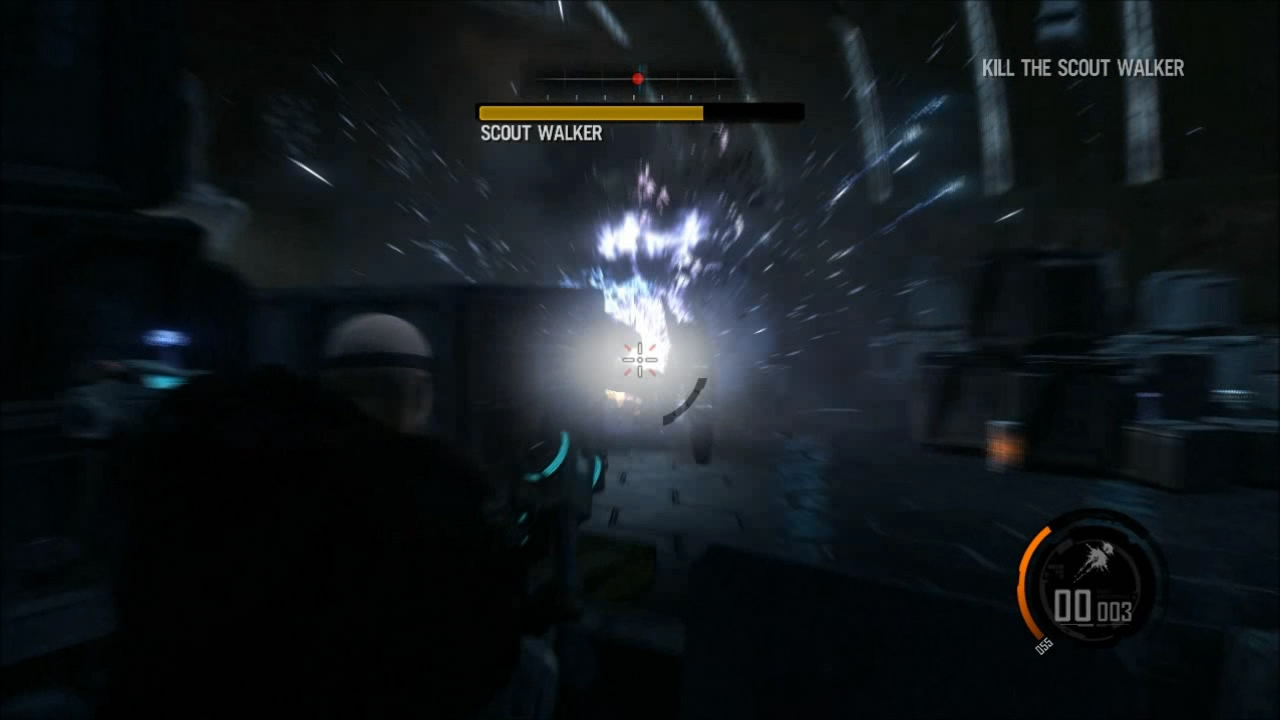 In the first level of Red Faction Armageddon, you start the game at a point before the main timeline of the story. The Terraformers which keep the Martian atmosphere in check are under siege by a group of cultists led by one Adam Hale and they are attempting to destroy the structures which would be incredibly catastrophic. You, Darius Mason, are part of a group of Red Faction soldiers sent in to stop the cultists.

Objective: Break the Wall
As soon as the level starts off, you are given a quick run-through of the controls with some calibration adjustments. After this is done, take out your Maul and knock down the wall ahead of you to proceed. Walking through the opened wall will grant you the Plasma Cannon.

Objective: Enter the Transformer & Destroy the Solar Towers
There are three large Solar Towers in this area that need to be taken down to drop the shield preventing you from progressing further. The quickest way to take out the Solar Towers is to detonate the various red barrels by the base of the structures to use the least ammo while creating salvage for you to pick up. Once all 3 are down, the shield will drop, allowing you to proceed onwards.

Audio Log #06 (1/3) – Before leaving this area, run away from the shielded entrance and down the road in the opposite direction until you reach the roadblock with flaming wreckage behind it. Here you will find Audio Log 06 along with some salvage which is the first of two in this level for those looking to get the Chronicler achievement or Trophy.

Objective: Secure the Area and Find the Cultist Reinforcements
More friendly Red Faction Soldiers come down from a drop ship in a quick cut-scene as you reach the first real combat in the game. Ignore shooting the majority of the Cultists directly, instead opting for well-placed shots on any nearby explosive containers. Those occupying the larger buildings are best dealt with by the Plasma Cannon and its structure collapsing blasts.

Audio Log #21 (2/3) – At the first large building occupied by several Cultists and a gunner up top, just across from the dropped troopers, you will find the second Audio Log. After bringing this structure to the ground with the Plasma Cannon to quickly exterminate its occupants, check where the rear section used to be, near the wall for the next recording.

Objective: Repair the Bridge
After looping around to remove the nearby Cultist threat, ending up at the location the Red Faction soldiers were dropped in, you will now be tasked with repairing the destroyed bridge using the Nanoforge. This utility is invaluable throughout the game, allowing you to repair any path or building as needed.

Objective: Kill the Scout Walker
Upon entering the final area of this level, you are greeted with quite the challenge, a Scout Walker. These four-legged mech-like robotic suits are armed with two very deadly weapons, a lightning Bolt that does constant damage as it hits you along with a charged laser beam that does massive damage while blowing apart structures.

The tactic here is to pop out of the plethora of cover in this room while using the Plasma Cannon to fire bursts charged up while in cover, then released upon momentarily jumping out from behind it. The Nanoforge can be used to repair any destroyed cover so that you can continue to have something to duck behind. Finishing off the Scout Walker completes the level Armageddon.

Audio Log #33 (3/3) – This log is unlocked after completing the level and can be heard through the Extras menu.