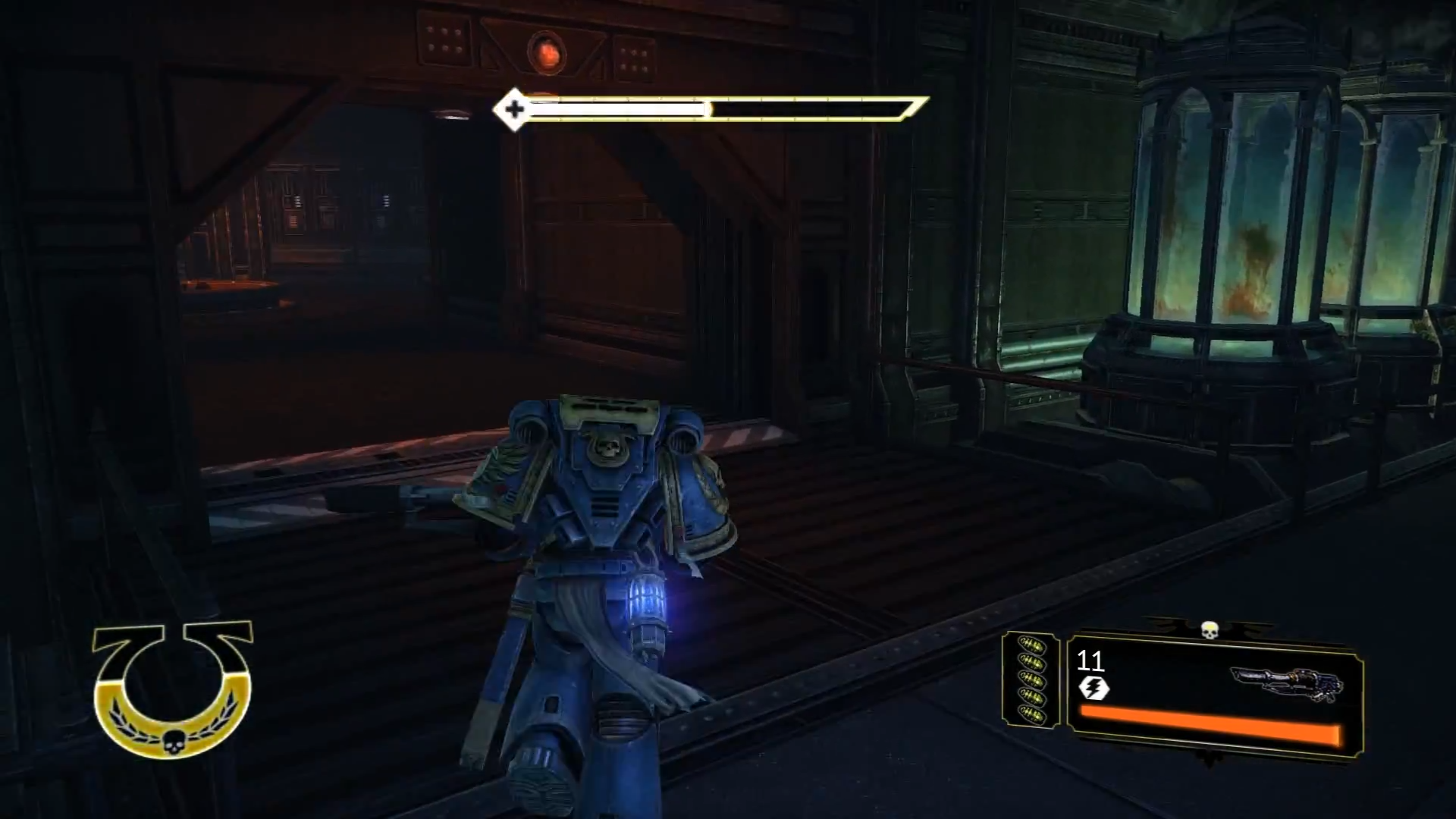 This guide covers the locations of all of the collectible Servo Skulls which are located in Chapter 10: “House of Secrets” in Warhammer 40,000: Space Marine.

After the first couple encounters in chapter 10, particularly the first large room you fight several servo turrets at once in, you’ll come to a long hallway with explosive barrels attached to the wall. In this hallway, you’ll have to face off against a pair of turrets that slide along rails next to each side of the wall, moving along their tracks to shoot at you. After this encounter, run to the end of the hallway where it splits to the left and right. Take the path to the right first which dead ends into a little corner where you can find the first servo skull.

“The Orks have thrown my duties into chaos. I only get distress calls now. ‘The Xenos are here,’ ‘The hab block’s on fire.’ And today, Transmechanic Aleric insisted I contact every single planetary defense outpost. A hundred stations! He just didn’t want to do it himself. None of the stations picked up. When I told him that, Aleric rushed off. No acknowledgment, no thanks. I suppose even an Ork invasion can’t change some people.”

In the labs section of Chapter 10, “House of Secrets” you’ll make your way through some of the Inquisitor’s laboratory rooms, still guarded by servo turrets. Once you reach the second laboratory, after receiving the Kraken Bolter, check the side rooms to the right, that branch off the main lab. You’ll find a servo turret or two in these rooms as well, along with tables of cut up Orks that starts a conversation about the experiments being conducted there. Run through these rooms until you find the servo skull, located in the middle of the 3 rooms that branch off and connect with each other and the lab itself.

“The Orks broke into the temple. I couldn’t hear them — I was plugged into my console. Then someone crashed into me, hard, from behind — it was Transmechanic Aleric. He had an Ork axe in his chest. He’d blocked the attack meant for me. The Ork went berserk — he grabbed for me but only caught my robe. I ripped free and ran. Aleric saved me. He died, saving me.”

The last skull isn’t found until the very end of the chapter when you are in the final room, fighting off large waves of Orks before inserting the power source you have been carrying up to this point, into the Inquisitor’s weapon system. If you’re facing the central mechanism from the door you came through originally, look to the right to find the lowest of several walkways that connect to the central platform. This walkway will have a halfway smashed open door, spewing fire, which the Orks were pouring out of earlier. Run down by this door to find the servo skull right next to it.

“My work began with two simple questions. On that day, my ship had just entered the dimensional limbo of the Warp. Most people do not like to think of the Warp’s true nature. After all, it lets us travel between the stars. But the warp is the realm of Chaos. Creatures of absolute evil – and absolute power – take their strength directly from it. So, I asked my questions: Could I tap into that power? And what could I do with it?”