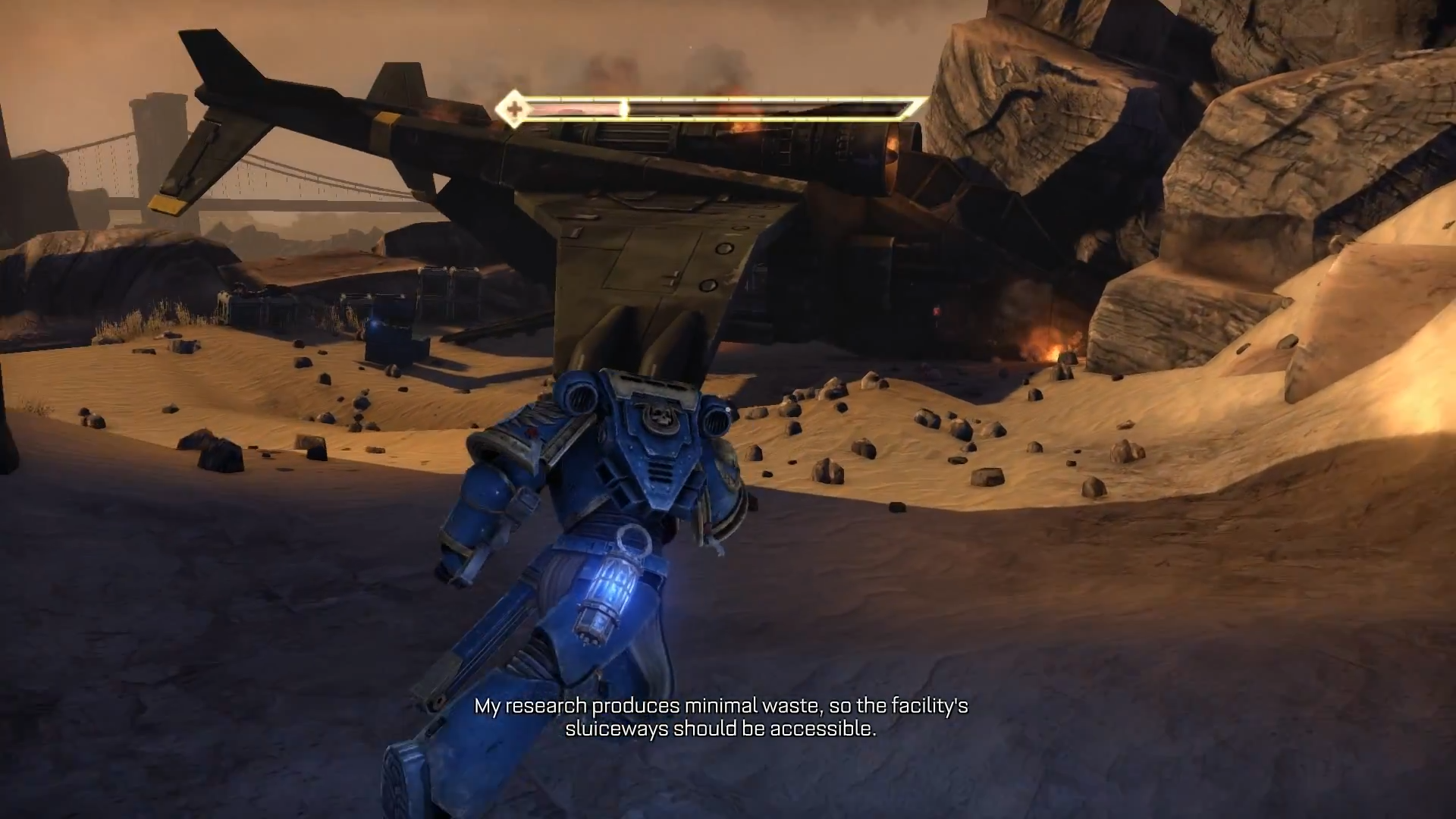 This guide covers the locations of all of the collectible Servo Skulls which are located in chapter 9 “The Weapon” in the video game Warhammer 40,000: Space Marine. Unlike the previous chapter, this one only has a small handful of servo skulls to find, with only 3 of the 48 skulls spread throughout the game, to collect.

All of the skulls in The Weapon are found after the initial two sections of the chapter “Chapter Start” and “The Bridge.” Both of these sections are short compared to the third “Kalkys Outskirts,” but if you’re just looking to pick up skulls missed previously, you can just skip ahead to save yourself some time.

Servo Skulls In Chapter 9 “The Weapon”

The first servo skull is not found until after the first portion of the mission and after your second Valkeyrie flight, the one that results in you landing safely at your intended destination with Drogan and your battle brothers, rather than the first which results in a crash landing and fighting your way through an Ork encampment. After some light combat as you travel through the desert like area, you’ll encounter a bridge broken by some falling object, which should happen while you’re fighting the Orks around it. Turn to face the broken bridge, then look to the left and you’ll find a small break in the rock wall covered in shadow, which turns out to be a small passage leading to a servo skull.

“Benjamin, I feel like I’m leaving breadcrumbs for you to follow. We can’t wait for you here. The shift-group left without us. The whole idea was safety in numbers, but they didn’t bother to wait. This hab block’s completely looted. We’re heading for Evacuation Center Epsilon. Look for us there. Be careful, Ben.”

This second skull in chapter 9 is really easy to find and hard to miss. As you continue on your way to Drogan’s lab, you will encounter a crashed, but mostly intact Valkyrie right next to where you have to walk past. Next to the Valkyrie itself are some ammo crates along with the clearly visible skull. Around the same time you’re approaching the crashed ship, your companions will start discussing finding a way around the Orks and Drogan’s lab itself.

Dominus: “– radio says the Orks are two streets away.”
Cassia: “Help me with this, Dominus. Hurry.”
Dominus: “What are you injecting him with — stop! This is a fatal dose!”
Cassia: “Yes, it is. I have enough for every patient.”
Dominus: “You’re murdering them?”
Cassia: “I’m showing them mercy. In ten minutes, the Orks will break through those doors and slaughter them all in their beds. Better to die in peace before that. It’s the last thing I can do for them –“

The final skull in this chapter is found towards the end, after you have fought off the massive Ork wave during the wait to enter the first major door to Drogan’s complex. You’ll eventually find yourself still outdoors, but fighting around what seems to be the plumbing system of the complex, with massive pipes all about.

You’ll fight your way for a while longer past many Orks, traveling underneath pipes that stretch across the area you are moving through. At the end of the lower ground stretch you’ll enter a ruined section of building where you’ll follow a makeshift spiral ramp, formed by debris, around a stream of water pouring ahead, to make your way to the upper sections of the facility. Before going up this ramp, check in the far end behind some broken pipe sections to find the last servo skull hovering in place.

Guardsman: “– we’re all going to die out here –“
Lt. Mira: “You are an Imperial Guardsman. Start acting like one!”
Guardsman: “But, Lieutenant –“
Lt. Mira: “We’re not dead yet! So do your bloody job and defend the line before they –“