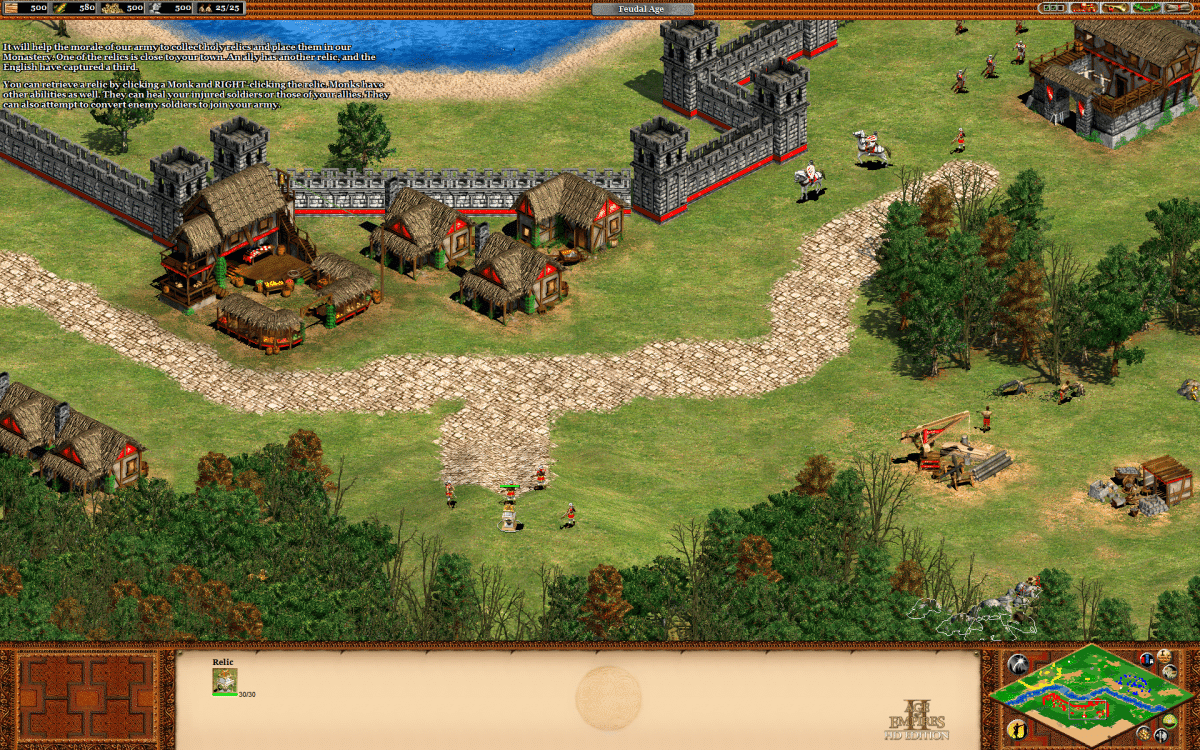 This is the first of the actually challenging missions, leaving the tutorial side of things in Age of Empires II, however still keeping the difficulty relatively easy to help smooth the way into the tougher missions in the later campaigns. Here you are tasked with building up your town, defending your ally Yellow, while fighting off and protecting them from the red enemies, the English.

The map is set up with a river that runs through the middle, dividing the land into north and south. In the south is the enemy english base which stretched between two access points that allow land units to cross the river. On the north side and to the east is your base, with yellow, your ally to the west.

Objective: Capture 3 Relics and Garrison Them in Your Monastery.

The first relic is located just outside your Monastery in the town you start off with, so use a Monk to pick it up and move it into the building, which provides you with a steady stream of gold.

You should work on your initial economy, harvesting mainly food to allow yourself to reach the Castle Age. Use the Scout Cavalry you start out with to uncover the map, avoiding crossing the walkable paths that go over the river for now, since the English defenses on the other side can kill them if engaged. Don’t worry too much about defense early on, as the AI is slow to get on the offensive.

You can also take one of your Monks and move them to your Ally’s base to the west early to grab the second relic ahead of time if you’d like. It will be beneficial to research Cartography from the Market, and in any other mission with AI allies since this allows you to share their vision.

Relic #2 and the Allied Celts

The second relic, as mentioned earlier, is found within the walls of the allied town that lies to the west, in it’s upper right corner where a path leads up to some hills surrounded by trees. Retrieve it’s relic as soon as you get the opportunity.

The English will begin to send attacking groups out around 9-10 minutes into the mission, so try to build a few extra soldiers with some upgrades if possible, to combine with your starting army. The AI seems to go after your ally first, which makes things easier on you, and you don’t have to worry about rushing too quickly to their aid since the English will take forever to do any real damage to their town.

If your prompted to send your ally resources through tribute, feel free to ignore the request as it makes little impact on the outcome of the game. The AI doesn’t seem to make much use of the resources given anyway.

Fighting the English and Relic #3

Once you’ve fended off the English attack on your ally, continue to pump out soldiers so you can start taking the fight to the enemy. If you push across the river and start to engage their gates that protect the base, you can pull out all of the defenders inside the walls which you can then engage. This will leave the walls defenseless, preventing you from having to deal with them as attackers at your own base later.

Once the walls are for the most part, free of enemy soldiers, work on breaking them open, which is best left to your Man-at-Arms (or upgraded Long Swordsmen) since they have a bonus versus buildings. Once you manage to break open the gates, stopping of course to fend off any new defenders that come to try to kill your soldiers, rush your troops in and start having them clear out the military production facilities and any remaining enemy soldiers. You’ll need to bring one of your Monks to the center of the English base, where the relic stands on a hill and run him back to your monastery with the relic to complete this mission.

Previous Mission
The Battle of Sterling

Next Mission
The Battle of Falkirk