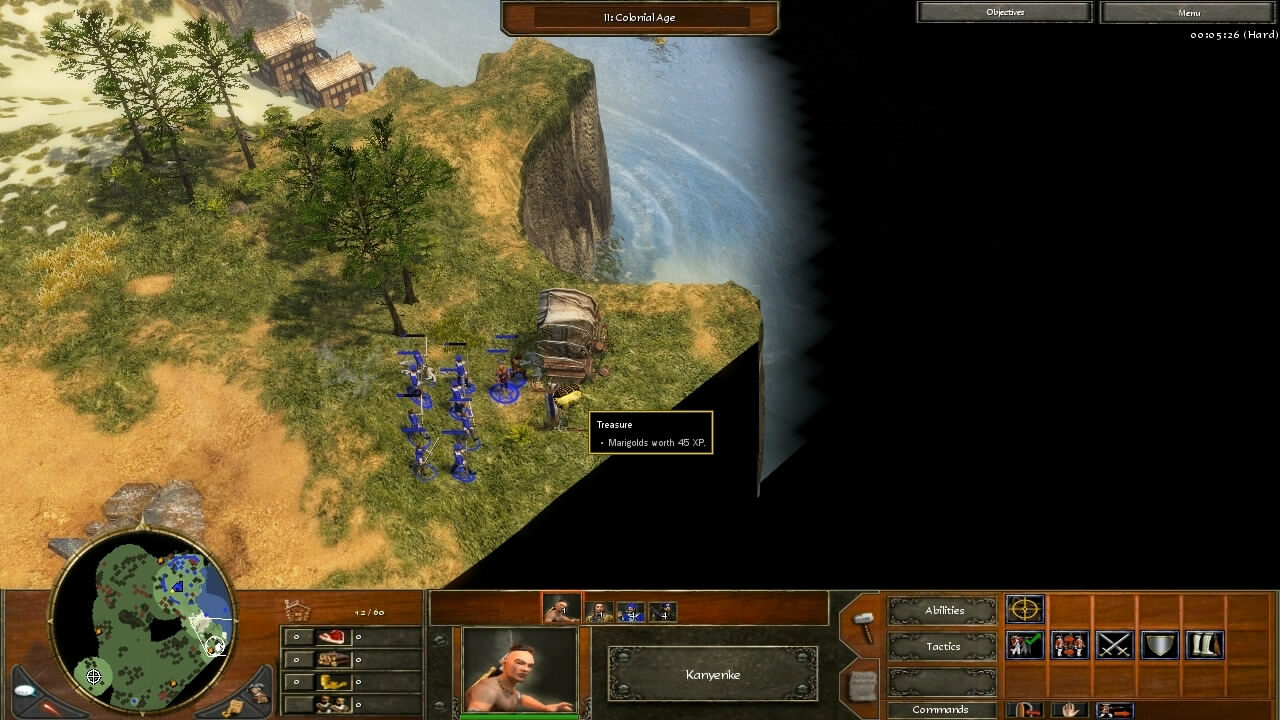 The second mission in Ice is deceptively longer than it first looks to be, starting out with John and Kanyenke taking a small group of soldiers against the Cherokee War Huts in the area to cease the threat they pose to the colony. You will have limited forces in the first part of this level so you will need to be a little cautious with them initially.

You begin this level in control of the town, however unable to utilize it due to no resources or Settlers, so ignore it. Starting off take your armed forces and make a circle towards the left War Hut by moving northwest to find some treasure, the shield of El Pollo Guapo and collect it using John since he will get the most benefit from the 30% boost to health it gives. From there you can approach the War Hut and work on the defenders stationed nearby it.

When you’ve killed the visible defenders you can damage the building slightly to draw additional troops from nearby and engage them as they arrive to save time from having to weed them out yourself. Do this before doing significant damage to the War Hut as it will spawn its own units to defend it as you tear it down. As these new units spawn, stop attacking the hut to focus on them before going back to your original task. Once the first hut is down, repeat this process on the second.

Note: Below the second hut is a Cow that is found through a treasure item. Rescue it and leave it there as a marker for later.

Primary Objective: Bring John and Kanyenke to the main Cherokee village to negotiate a peace.

Before accomplishing this simple objective, head east to capture another Treasure item if you haven’t grabbed it already for some additional experience towards shipments. Next head directly west to the opposite corner of the map, still ignoring this objective momentarily to find some Houses and a Mill currently in control of the Mother Nature (neutral) faction.

The buildings are supposed to be transferred under your control later, however building your base here when it comes time for this will actually make things harder. For this reason we will have to abandon these structures to the British when turned over to our control, causing them to be lost to the enemy early on. Instead of doing this, you can destroy them now while they are still neutral to instead use them to amass even more experience for shipments, then rebuild them later where they can actually be useful to you. Capture the treasure just past the buildings before leaving.

Once you’ve finished off the structures you can move to the target point on your map to accomplish your current primary objective. If you may have guessed, it turns out to be a trap, with four British Musketeers attacking your forces but easily dispatched. At this point you will lose control of the main town while the British level it to the ground and capture Stuart.

Primary Objective: Establish a New Colony and defeat the British

Take a moment’s breather as you wait for the in-game events to play out as the British take the town, leaving your forces in the south by where they got jumped by the British Musketeers. Once you are given control of the Covered Wagon that departed the main base during the attack, send it down to the stray cow mentioned earlier and build your Town Center there. Doing this will give you more time to prepare before having to face British attacks.

From here on out the mission pace slows down significantly with your primary goals being to build up a strong economy to fund a large army to plow the British with. Use your accrued shipments to send in Settlers and other economy boosting options initially to get things rolling. You can rely on the nearby silver mines for gold, switching to Plantations only when these sources become expended or defensively untenable, but you should opt for Mills versus deer for food since you do not want your Settlers straying far from the confines of your base.

Once you’ve gotten your economy started, defense should be focused on slowly building up a marginal army to block the beginning attacks while placing a Fort just north of your town with Outposts in a half circle around your base to the east and west of the Fort. Most of the British groups will approach from the north, encountering the Fort while the Outposts will protect you town and Settlers from stray exploring soldiers.

Advance through the ages while you keep your town defended so you can outfit your army with Mortar and Falconets, the Mortar in particular which will be needed to take down the enemy Fort. Building an Arsenal to upgrade your forces is also a pretty good idea. Once you’ve gotten your population to over 130, a force of some 40-50 Musketeers and Skirmishers all together with 3-4 Falconets and 2 Mortar, you should have a substantial enough force to begin your attacks.

Upon moving out against the British, find the Fort which should be somewhere near the center of the map and engage it with your Mortars while your forces stay out of range. You should end up drawing out the main force of defenders which is where the Falconets come in to help. Upon clearing out these enemies you should have an open path to cut through to the heart of the British base.

By now your forces should be progressively tearing apart the British town when a new secondary objective is presented to rescue several groups of Settlers presented as new Treasure items along the edges of the original town’s walls. Divert some forces to prevent from destroying the base to fast and kill of the guardians around each pair of captured Settlers before using one of your heroes or another Settler to release them. Once you’ve confirmed grabbing all the trapped pairs, return your focus to finishing off the last of the enemy base. Eventually when thew British are reduced to a handful of structures and basically no units Strange Alliances will end in victory.