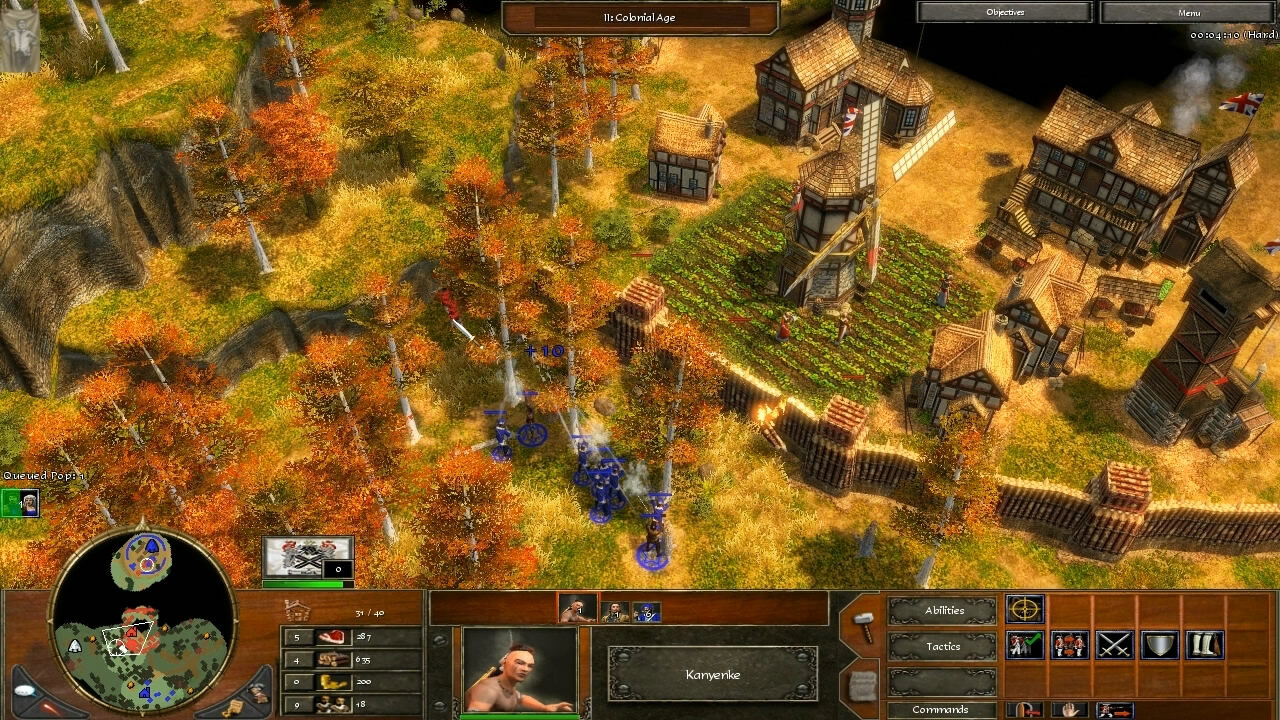 Mission 3, The Rescue in Act II “Ice” of AoE 3 takes us to Kanyenke’s village where both him and John have suspected the British of potentially attacking, considering the personal nature of the British General, Warwick’s actions and his membership of the Circle of Ossus, the old enemies of the Black family. You will have to distract the British long enough to rescue the native village and Kanyenke’s sister in the process.

Primary Objective: Train an army and attack the British from the south side.

This level starts with you in control of two main locations, your covered wagon, John, Kanyenke and some troops to the south with Nonahankee and the Iroquois trading post with some troops and an Outpost to the north. This Trading Post must survive the duration of this mission or else you will fail. The British will constantly send attacking forces up north against Nonhankee and the natives there which the British base literally blocks the only path to, forcing you to find other ways of keeping it safe, covered below.

Get your Town Center up ASAP and the Settlers to work on resourcing with additional shipments of Settlers to quickly get an economy going. Take your south forces, ignoring the north for now and send them east to find some treasure granting you experience. From there move north to find some food treasure. Base building should be composed of a mixed progression towards military and economy. You wont need a major force to succeed as micromanagement will be key here.

Note: This is the first mission which the enemy has a hero with which they will use to actively claim Treasure. Keep in mind if there is an item you want you will need to grab it fast or the Brits will claim it.

After claiming the second Treasure move west towards the British base, but not close enough to be in range of the Outposts. Here you will find some Surgeons and Priests which you can kill for a fair amount of experience, far more so than the treasure you just got. Wait here until the first British wave attacks the northern base.

Once you see the British attack the northern base, immediately send your forces to attack the wall around the enemy base to draw their attention away from the natives, forcing the enemy army to retreat. Throughout this mission you will use this strategy to keep that northern area safe. The enemy will send its army to the exact location you were at when you attacked, waiting around and eventually retreating back in the base to form up another northern attack unless you hang around to engage them, which you should avoid this early on. Instead use the natives up north to pick apart the troops as they retreat to reduce their numbers, pulling your southern forces back to keep them safe. Use Nonhankee’s heal to keep the native troops alive and avoid replacing lost units for now, but do repair the Outpost or Trading Post if damaged.

Your next set of goals will be to train Musketeers with a Barracks while calling in a Fort card with one of your shipments and building it where the Priests and Surgeons where, between your Base and the British’s to give you a good place to retreat to and draw enemy aggressors towards as a means of finishing them off quickly while also preventing stray attackers form reaching your Settlers.

Secondary Objective: Ally with the other Iroquois. (200 XP)

Take some time in between your other operations to send a Settler or John Black to the east and west corners of the map to build Trading Posts on Iroquois camps to increase the amount of natives you can train at the northern encampment, which you can start doing as resources are built up and freed from the need for other purposes.

After that initial distraction attack on the front gates, head around the west side of your base through the Woods to where you can hit the British base from the unguarded, outpost free side. From this point you should be able to reach the enemy Settlers with your Muskteers and other ranged units.

This is where you can turn this mission to your extreme favor, during your harassing raids always make sure to eliminate as many Settlers as possible, even eventually breaking through the wall when you get some cannon to get rid of some you might not be able to reach. If you keep pulling back when the larger groups of soldiers arrive, you can effectively starve the enemy by disabling their economy.

You will notice when the British are nearing depletion of their resources when they can no longer replace their lost Settlers and activity in the base seems to cease for the most part. Once this happens you should be able to overcome the enemy with a moderately sized force even if lacking any cannon, although such artillery will be a major help. Once you break through the southern defenses, order your northern units to flank the base from their side and speed up the destruction. Once the base has been substantially reduced to rubble, the natives are saved and the mission The Rescue is ended in victory.