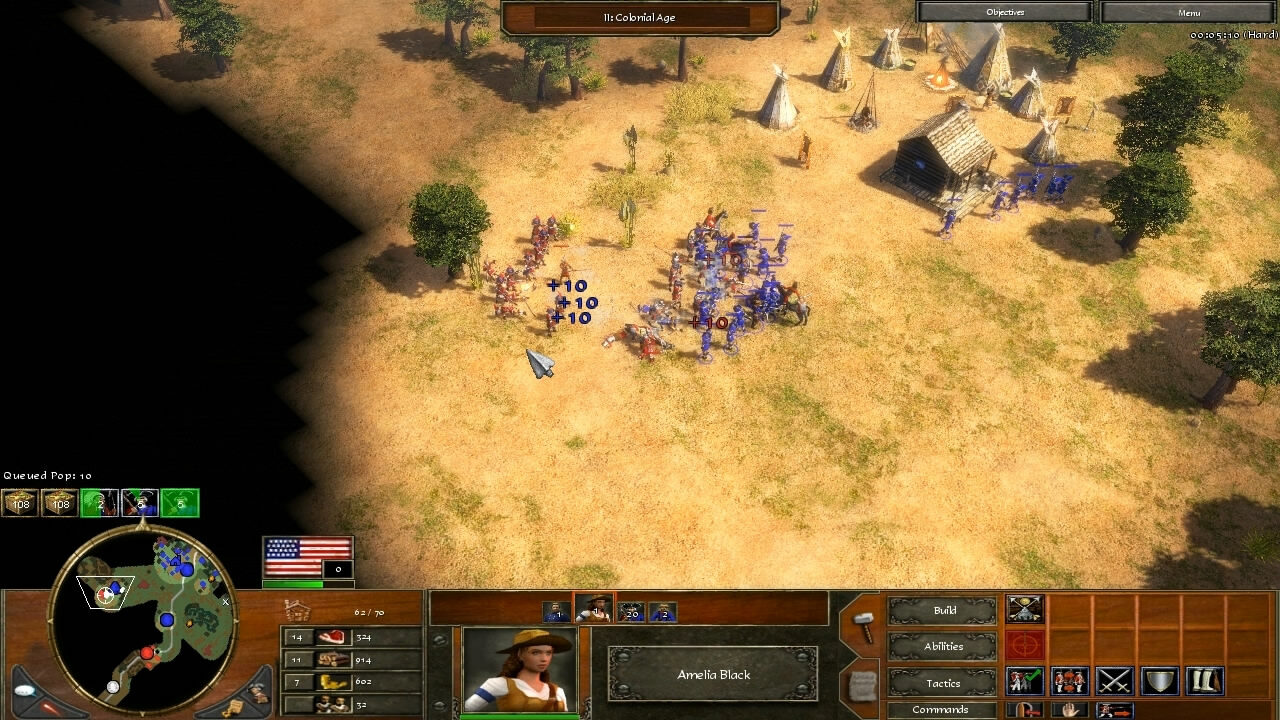 Mission 1: “Race for the Rails”

In the first level of Act III, Steel follows Amelia Black as her railroad company is employed by the American government with forces under the command of Major Cooper. Amelia and her company have been employed to extended the existing railroad network further south against the oddly violent competition with the St. Louis Railroad Co. (I don’t remember the part of history where railroad companies waged wars on each other…)

Primary Objective: Build Trading Posts on all sites along the Trade Route.

As soon as the level starts, get to the normal economy building tasks of training Settlers (only a handful though) and shifting current harvesters to the resources you prefer, typically wanting to prioritize food first and wood second with gold third this early on. Take Amelia and immediately send her to the trading post just south of the one you start with while switching both to actual resources instead of experience. Keep in mind the enemy’s base is located in the west corner of the map and their attacks will approach from there.

Secondary Objective: Ally with any Native Americans in the area. (200 XP each)

Start training Musketeers early on and continue pouring the majority of your resources into this goal, with a few set aside for the occasional extra settler or resourcing upgrade. Grab a Settler or Amelia and take them to the east of your base a few screens away to find the first of two Native American camps. At about 4:30 into the game, you should aim to have this post being built and about 20 Musketeers (send for their card when you get the chance) with more being built and Comanche Archers being trained from the Native camp once it is up. Move your Musketeers with both your heroes and any Railroad Workers you have, basically your whole army, and move them to the camp to start attacking the enemy base early on.

Since the enemy base is right nearby and they are likely to mass their forces just top the left of your Comanche camp, be prepared to engage their forces, which should be happening around the five minute mark for this early rush type strategy to work. Make absolutely sure to utilize Amelia’s ability on a clustered group of units to take out several of the enemy infantry as you engage while pumping out Comanche Archers nearby and setting the rally point of your barracks nearby to provide a continuous stream of Musketeers to bolster your force.

Once you have overcome their small army, continue your advance west and you are now able to attack their undefended base pretty much unhindered. Just keep building forces as the resources become available and look around the town for the enemy Settlers. Once you have found the Settlers, kill them all to cut off the enemy’s resources and completely neuter them early on. For more details, this strategy is performed in the video below, with the point of win clocking in at around 6:30, where the enemy is taken to the point of irrecoverable damage, leaving the rest of the mission to just wiping up the remaining buildings and scattered units.

From this point on you really can’t lose, so switch your Trade Routes to experience as to work on leveling your home city while now saving up resources in order to advance an age and research Mercantilism in order to grant 1,500 experience before leaving the level. If you ever have free time or resources at the end of a level, this research item is great to work towards new cards for the next level.

Keep building the few attack units here and there to speed up the destruction process, moving against the two southern trading posts owned by the enemy once their town is vanquished. Just south of their ex-base, you should find the second Native American village, which you should have Amelia construct a Trading Post at while your forces move past. Once the enemy’s posts are destroyed, you will have to construct your own in their place so you have all four locations built on. Doing this will satisfy the primary objective and end the level in victory.

Essential Home City Cards to Have