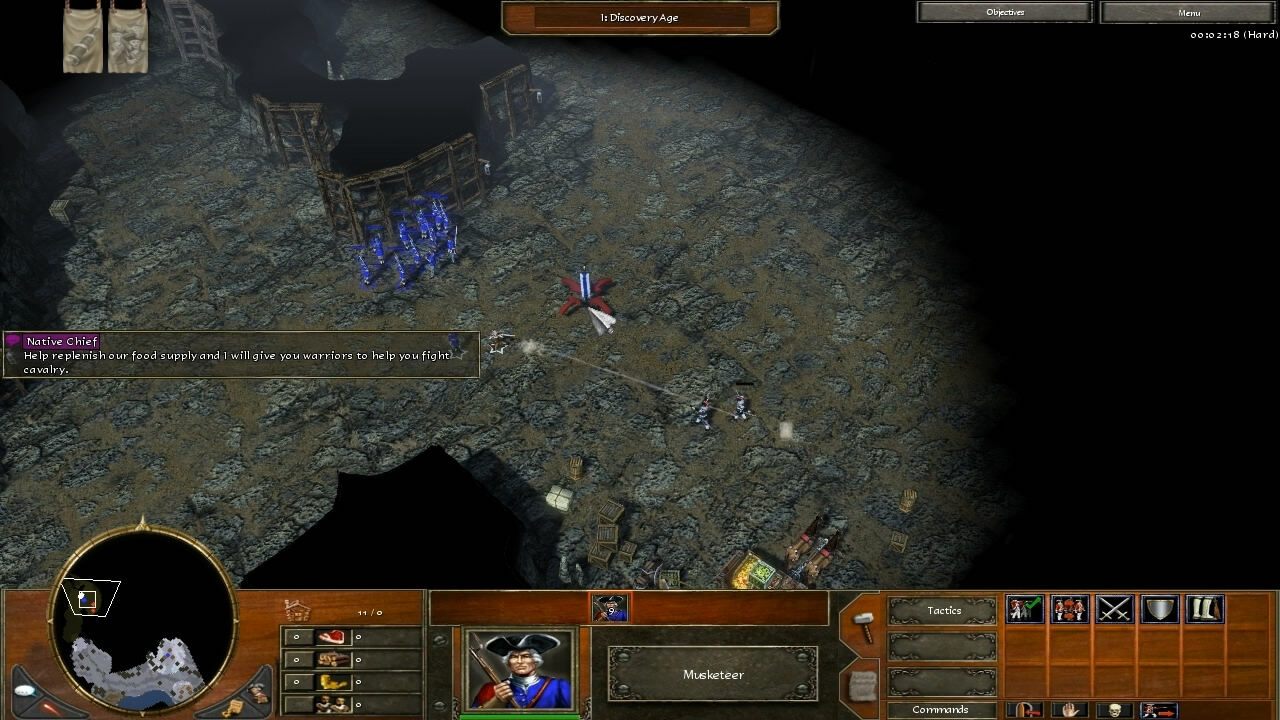 Thanks to the return of a now aged Kanyenke, we are able to discover Beaumont’s true allegiance to the Circle of Ossus, the arch enemies of the Black family, before Amelia is led into a trap by the cunning Frenchman. Kanyenke and Amelia will have to take a limited group of forces and clear out the Circle forces within the caves in the level The Boneguard’s Lair.

Primary Objective: Find Beaumont and drive him and his men from the caves.

This level is going to focus on managing limited forces and utilizing the special abilities of your heroes as often as possible. Keep them on their own hotkey group and in every encounter possible, use their special attacks and the heroes themselves as damage shields for the rest of your units. Once a group of enemies is engaged with your heroes, bring up your remaining units, which should be on another control group. Keep this strategy up throughout to make things simple for you. After taking out the first group of Boneguard, you will be given control of Kanyenke.

With Kanyenke, travel east along the outside of the map to find the remaining two camps which provide you with units in exchange for food carts. Besides one food cart that should eventually go towards the Medicine Men, they should all go towards the left village to be exchanged for riflemen. Your units in the cave should be making their way north and around, sticking to right side of the cave to curve around towards the second cave entrance Kanyenke should have given you vision of as he passed towards the villages. Work on making your way to this second entrance to make it easier for you to bring in some medicine men before heading back the way you came and clearing out the remaining part of this section of the cave.

Besides capturing food carts, you will find several prisons containing soldiers that will join your forces if freed. Always make sure to take these out to add to your army. The final other activity in these caves will be destroying a series of weapon caches (see images for their locations) scattered throughout the caves, including one at the second cave entrance mentioned earlier. When attacking these caches, do so at first with your heroes only as they typically always seem to draw additional enemies to aid in their defense. This will keep the new defenders attacking your heroes and not killing your Infantry.

Once you’ve cleared this side of the cave and encountered Beaumont who taunts you on the other side of a blocked passage, head back towards the second entrance to head around the bend there into the next major section of the caves, all the while sending food carts for riflemen and using your two Medicine Men to heal your forces whenever their ability becomes available.

You will now be in a more narrow area that will eventually lead you back outside where an arsenal sits in the snow before another bend towards a final cave entrance. Destroying this building opens up a new path for reinforcing natives and captured food carts to pass through with the removal of some blocking trees.

Make your way into this final bit of cave with what should be by now a significant force and you will be granted vision of the entire section. Approach the top part where the two treasures sit slowly with your heroes only and pull back as soon as you see the large Boneguard force enter the cave. Once the forces come to a rest you can park your Infantry nearby and pull small groups of the Boneguard towards your main forces using your heroes and their special abilities (Kanyenke has the longest range). If you can manage to pull these units in their small chunks then you should be able to wipe out their forces without losing any units yourself. All that will be left is their cannon which you can safely plow into the dirt.

Collect both treasures once the Circle forces are vanquished and exit the top part of the cave to complete the level The Boneguard’s Lair.