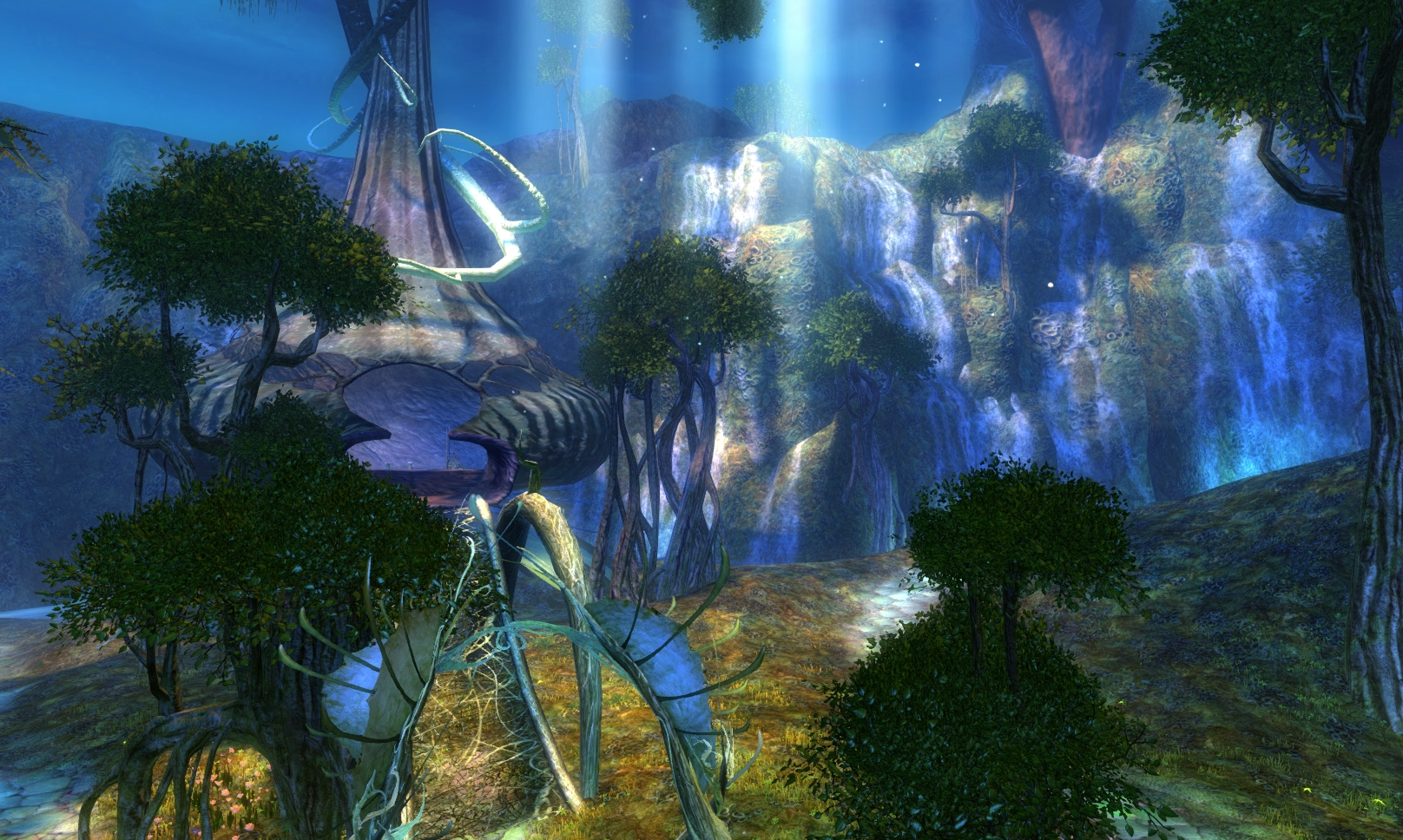 This guide will cover all of the Vista locations in the city of The Grove, for the MMORPG Guild Wars 2. Within you will find a list of each with pictures and directions on how to reach them along with a video walkthrough.

There are 6 vista spots to be found around The Grove, the city of the Sylvani race in GW2. The style of their city is that of nature mixed and some touch of elves, with plant-like buildings and structures, mushroom platforms all over the place, and seed pods that serve as elevators to name but a few aspects that carry this trait. Most of the view locations are easy to grab, requiring a lot of platforming on mushrooms and the like with nothing too mind-bending.

For more vista guides for other cities and areas, you can check the link above for a full index with links to more guides.

This first vista on the list can be a little confusing to find at first until you know how to reach it properly, positioned in a house suspended in the air without any direct ramps or means of access.

From the Reckoner’s Waypoint you can find the road to the east of where you teleport in, that curves around to the south, when followed, will take you to the house. Look for the top of the structure in the pocket of open space to the left of your character as you run along the road, which looks like a pillar coming up from below. You can jump off the side of the road, drop down onto the house, then into the entrance of the house where the vista chills in the opening.

The Marshalling Field vista is a very easy and straightforward point to locate in the Grove. Take the Upper Commons waypoint on the upper levels of the city, head north a bit, and to the east. No obstacles are in your way here, but you can pick up a speed boost from a plant as you make the bend towards your destination, useful for exploring the rest of the city faster.

Technically also in the Caledon Path, this location is found atop a tall building, east of the caledon waypoint at the very northern tip of the city’s map. Run towards this tall building and circle to its north side, where you will find the beginning of a series of mushroom platform stairs which circle their way through the inside and around the outside of the building leading to it’s top.

All in all, this is probably the most difficult vista in the Grove, however this is by comparison, as the others are pretty much cakewalks with this one presenting more of an inkling of challenge. As you make it to the roof sections of the building, you’ll be able to use the structure itself to catch your character and continue your platforming adventure should you miss some of the mushroom pads.

Back to the relative cakewalks in terms of finding view points, for this one you’ll be traveling first to the Ronan’s waypoint, or at least we’ll be using it here for reference.

From this waypoint, facing south you’ll find a speed boost plant, which is worth using later and not for this particular vista, since it makes some of the platforming harder at times, and a ramp leading up to the next city level which you should start running up. Look to the right of the ramp and after a few seconds, you’ll see some mushroom platforms running along the side of a tree branch. Simply jump up these handfuls of pads to reach your vista.

The Tender’s Terrace point can be found in the northwest corner of the lowest level of the city, reached easily by the Ronan’s waypoint, same as the last one. A little more travel is required from the wp, but you can pretty much follow the city paths straight there. The building with the vista on its roof can be seen as you approach if you angle your camera up a bit.

Up a small hill, you will find the building has more of the same mushroom platforms you’ve been using so far on its east face. Since the building is small, there aren’t many pads to jump up, so reaching the roof and your reward is pretty easy here.

To the east of the Upper Commons waypoint on the surface level of the city, there is a large building with a more sloped roof than usual, known as the Envoy’s Shelter, which contains an armor repair merchant along with a weapon and armorsmith along with the vista you seek on its roof.

Run through the building and out the other end, turning around so you’re facing it’s east side and look for the mushroom pads along the outside wall to the right. Again, same deal as the others, though this time with larger mushrooms and a roof that’s more capable of being walked on. Once on the roof, you’ll jump up another bit to the very top with the help of another pad, then down to the point itself on the west-facing side.

Video Guide to The Grove Vistas