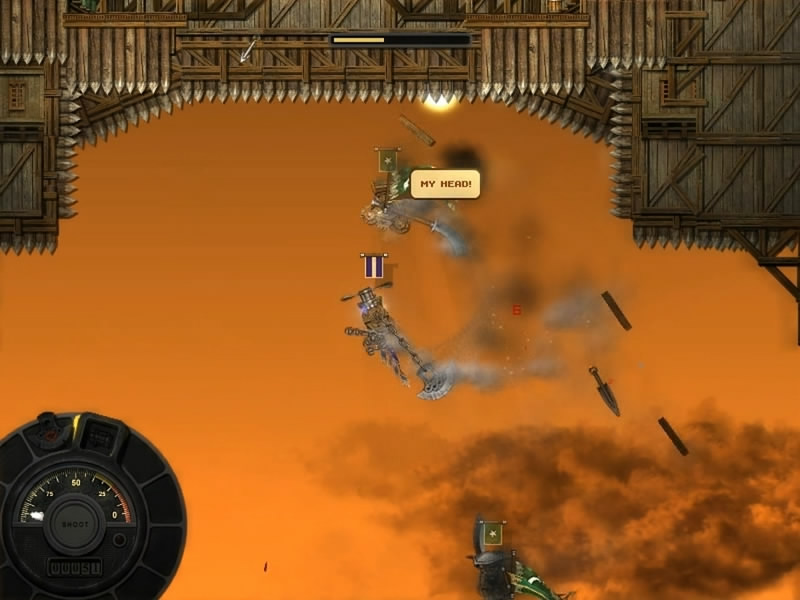 In choosing the Melkah Fortress path after part 7 in Hammerfight, you will continue on your travels by joining the man who set you free to overthrow the Emperor’s right hand, Senecherim of Melkah. This path will focus more on combat with enemy machines versus Aver-Aseed which will have you facing more monsters instead.

The first level of Assault has you entering the Melkah Fortress, engaging the guards that defend its entrance. You will start off with engaging a pair of typically hammer wielding machines first. Once this first pair of enemies are down, you will encounter a second pair, this time typically armed with swords, that you must defeat.

Some things to watch out for are the fact that at this point the enemy machines start to use a fair amount of items, especially thrown weapons like Javelins or Daggers or the like. Try to grab these as they fly through the air using the left click mouse button held down, the same way you grab regular weapons, so that you can use them yourself without spending coin at the shop. Another good idea is to try to knock the enemy into the structure at the top of the screen where they will take additional damage.

Moving further into the fortress you will face another set of two enemy waves in a different location. This time walls will be to the side with open space to the bottom and top. Your first wave will consist of a single machine with ranged weapon. Once defeated you will face a pair of enemies typically armed with swords that come from the top. Defeating both of these straightforward fights leads to the next level.

The third fight in the Melkah Fortress path of Chapter 2 switches things up a bit versus the previous two fights. This time around you will have a one minute survival timer that you must wait out while facing a constant wave of saw robots. During the entire fight you will also have to watch out for debris that perpetually falls from the ceiling. The best weapons to use against these machines will be dual swords.

Whenever you destroy one of the sawbots, another will take its place within a few seconds up to the max of three at a time. Fighting near the center of the level will give you some assistance in the form of a couple soldiers who will shot at the bots for you. Remember to watch out for their detached saws after their destruction as they can still hurt you. Once the time is up, victory is yours.

In this next level you will go back to fighting enemy machines. In this level you will face a single wave of a pair of heavily armored machines armed with axes typically. Although it sounds easier, there is a hidden timer in this level to give things a bit of a twist here as well.

As soon as the level starts, some soldiers near the side of the screen will begin to light ropes that go from the right and left sides up to the ceiling. They take a little while to completely burn up, so you can see the progress of the “fuses”. At the ceiling, where these ropes attach, is a massive cache of explosives that will detonate after a certain amount of time, once the fire has reached the ceiling and begun to burn the barrels.

If you can finish the enemies off fast and see the fires burning up there, try to hang around the lower part of the screen to survive the detonations, as being too near the top can end up blowing you away. Defeating the enemies ends in victory.

🕷️ Note (minor bug): If the explosives detonate right as you are victorious, as seen in the video below actually, you will have to wait around a little bit longer than normal for the victory screen to complete as the explosive “ring” fades away. This isn’t a major issue, as you shouldn’t have to restart.

This level is the final level in part 8 A of chapter 2 in Hammerfight. In this battle you will have to face a new boss type machine, a dual prop mechanical helicopter with a flamethrower type weapon and grasping claw. Try to bring some long range melee weapons like the mace, preferably the highest quality of these weapons you can afford.

The enemy machine has two main forms of attack to watch out for. First off and the most dangerous is it’s flamethrower that spits several fireballs out you in a bit of an arc that will follow your movements. When you see the right arm begin to track you, just move in a circle around the boss to avoid this.

The second attack is far less dangerous, being the metal claw grasp similar to the Sophit’s attack. What makes this grasp far less deadly than the Sophit’s by comparison is the fact that this boss is far less mobile and cannot lunge at you, thus the grasp is easy to avoid and stay out of the range from while beating the arm away with your weapon.

Every 30 seconds or so, unrelated to the damage you cause apparently, the machine boss will drop below the bottom of the screen and send a trip of saw robots to attack you, coming back up a few seconds later even if you haven’t killed the sawbots yet, so try to deal with them quickly.

Finally the best places to strike the boss are in its engines if your looking to make some serious coiun, or the central cockpit to try to drop it quickly. If you manage to completely destroy one of the engines, the machine will have its mobility greatly reduced and will sort of hang to the side, exposing it to even more well placed hits. Taking out the cockpit will demolish the craft entirely while taking out both engines will do the same by sending it colliding into the ground far below.