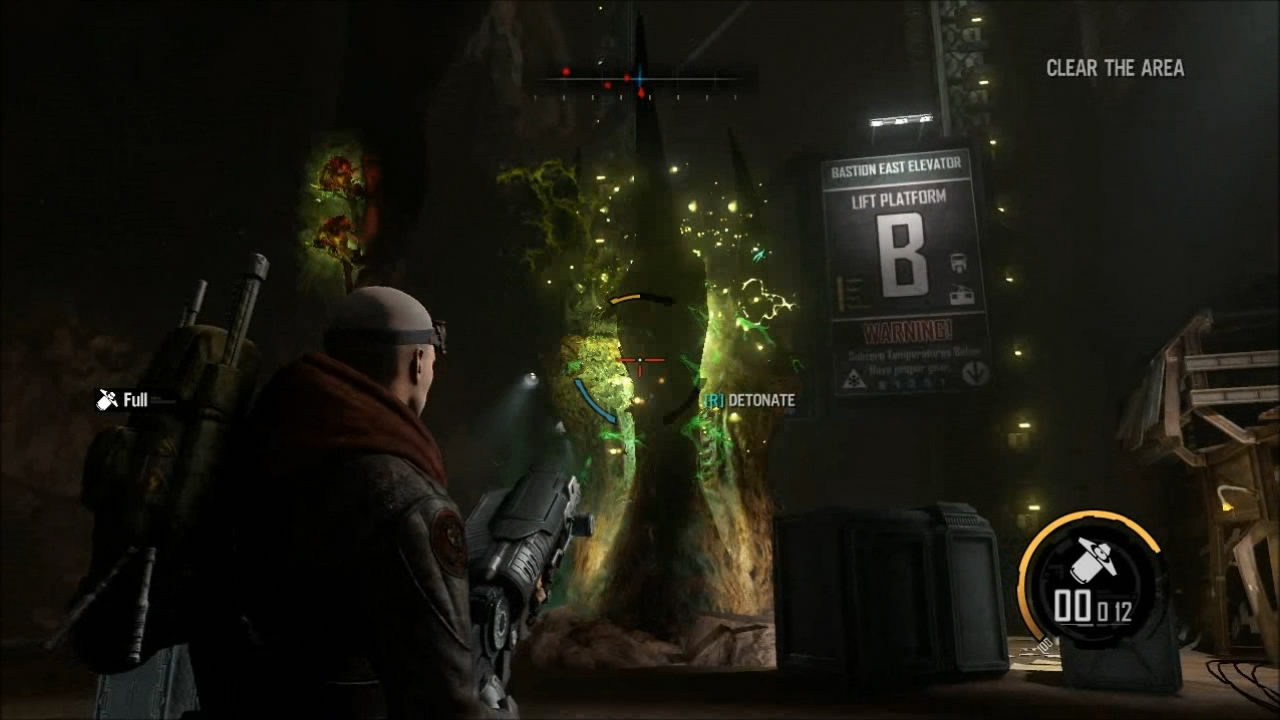 A moments respite, having fallen through the floor in the cave and ending up in a new area free of the alien for the time being. Darius makes his return to civilization only to discover the new guests got there early.

Audio Log #02 (1/2) – Pretty much as soon as you start the level you will come upon an area where there is a tunnel to your right with burning wreckage inside, blocking it off. Peer inside it to find the first of two Audio Logs in this level.

Objective: Get to the Mining Colony
Keep running down the path marked by your GPS, making your way through the outskirts of the mining colony. You will come across some miners who get killed by an explosion. Make your way past this point and in the tunnel ahead you will find the Charge Launcher, which is a weapon that fires sticky, remotely detonated grenades. This weapon is pretty useful for large groups or tough hostiles and you can fire up to four charges at once before detonating them.

Objectives: Stop the Invasion and Find the Signal
You will reach an open area of the mining colony where many structures are built almost upon each other in the cavern. As you begin to get attacked by the enemy you will find them starting to spawn in groups from portals that open in the walls. Deal with these groups quickly by picking up piles of debris or explosives and throwing them at the portals as they open. You can tell when these show up from the unique marker on your compass. Now is also a good point to get the Liftoff achievement or trophy by flinging some of the Ravagers or Creepers from one side to the other of these large open rooms.

After clearing the first major area you will have access to an Upgrade Station which i used it to purchase Health Indicators, but can be swapped out for something you may find more useful. The signal will be given off by a dead miner in the middle of the room which you just have to run up to before continuing on.

Objectives: Get to the Elevator and Clear the Area
Further along, you will be attacked by some Creepers which you can try to propel with Impact, as they will fly the farthest, for Its All in the Wrist. In the next room, you will encounter the first Monolith. These massive alien structures come out of the ground with a clawed maw like shape, firing projectiles at you while more significantly, boosting the armor and power of all nearby aliens. The boosted aliens will glow with a haze and become several times tougher, prioritizing the destruction of the Monolith in all situations where they are present or drawing the smaller enemies away first to handle each separately. Some excellent weapons against the Monolith are the Plasma Cannon, Charge Launcher or the Magnet Gun if there’s some massive debris you can throw at it with a fair bit of speed.

Audio Log #08 (2/2) – You will find this Audio Log after clearing out the room with the Monolith near some ammo crates and a dead Soldier. These are on the opposite side of the elevator from the activation panel.

Objectives: Activate the Elevator
Simply run up to the place marked on your screen next to the elevator to find a broken panel that you can repair with the Nanoforge. Once it’s working again you can use it to call the elevator and end this level.