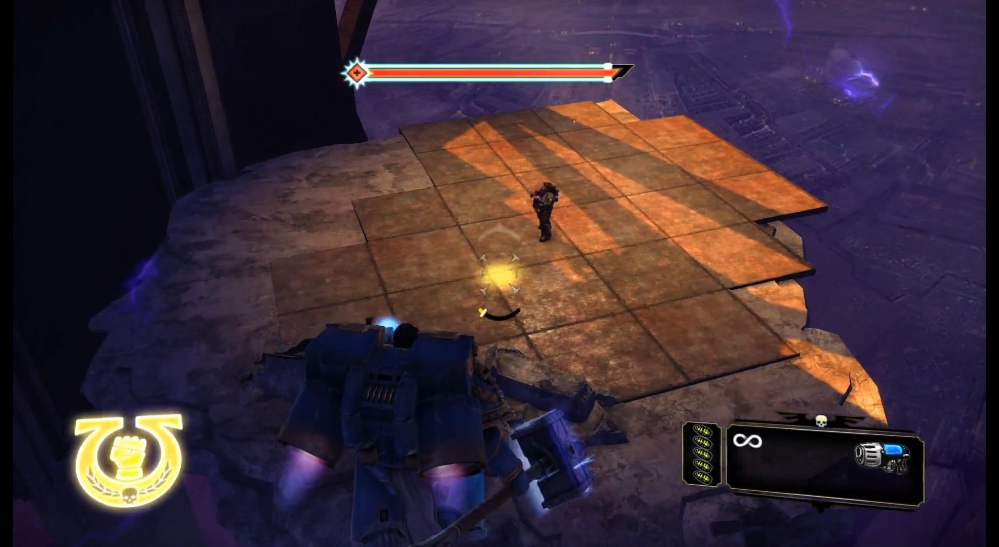 This guide covers the locations of all of the collectible Servo Skulls which are located in chapter 16 “Spire of Madness,” in the video game Warhammer 40,000: Space Marine.

This is the final chapter with servo skulls you can collect, wrapping up the last 3 of the 48 skulls to collect in the game and revealing the final secrets behind what happened to the Inquisitor, just prior to both the Ork invasion and his daemonic possession.

The first skull in this chapter isn’t found until the Ascent portion, after you’ve finished the massive bridge battle and have been dropped off on the spire with a Jump Pack equipped. After the first major engagements outdoors, you’ll head inside through an enclosed corridor briefly on your way to the next area. Keep an eye out to your left as you go through this corridor and you’ll find the skull hard to miss, sitting next to a large statue.

“I’ve encountered unexpected results. The Warp energies affect different species in different ways. Essentially, I can tune this weapon to cause maximum damage to whatever enemy we face. If humans are caught in the blast wave, they will not be harmed. Good news, I suppose… I have not slept in two days. The more I use the Warp device, the stronger the assault on my psychic shields. I need rest…”

The second skull in this chapter is located shortly after the last, when you head out into the second major outdoor combat area. You’ll face off against some Guardsmen, then eventually some Daemons of Khorne by some large pillars. Fighting these daemons here, you will also be subjected to fire by a single Chaos Space Marine armed with a plasma cannon, lobbing shots at you from far range. Use your Jump Pack to launch over to him and you’ll find the servo skull floating next to where he was standing on this small, free floating platform.

“The psychic attacks are increasing. I am hearing things, now — a name, a constant whisper in my mind. I must withstand it. Because something completely unexpected has happened: Orks are invading this planet. The timing is perfect. The Psychic Scourge weapon is nearly ready, and millions of Orks will prove the ultimate test subjects. I will save this planet. History will remember this as the moment we turned the tide against the alien threat to our people…”

At the end of the Jump Pack portion of this chapter, Titus will take the pack off, mentioning it has run out of fuel (triggered by the point in the mission, not how much you use the pack). After this point you’ll run through some corridors and a door before being attacked by a Chaos Drone. Once you’ve downed the drone, walk out onto the walkway and take a right, heading to the end where you’ll find a large room, mostly empty except for the final servo skull.

<daemonic chanting>
Drogan: <yell of pain>
Daemon: “– in Nemeroth’s name — I possess this corpse.
Possessed Drogan: “I possess this Inquisitor. I possess his secrets! The Warp device… …is here! So close! But how can I get to–“