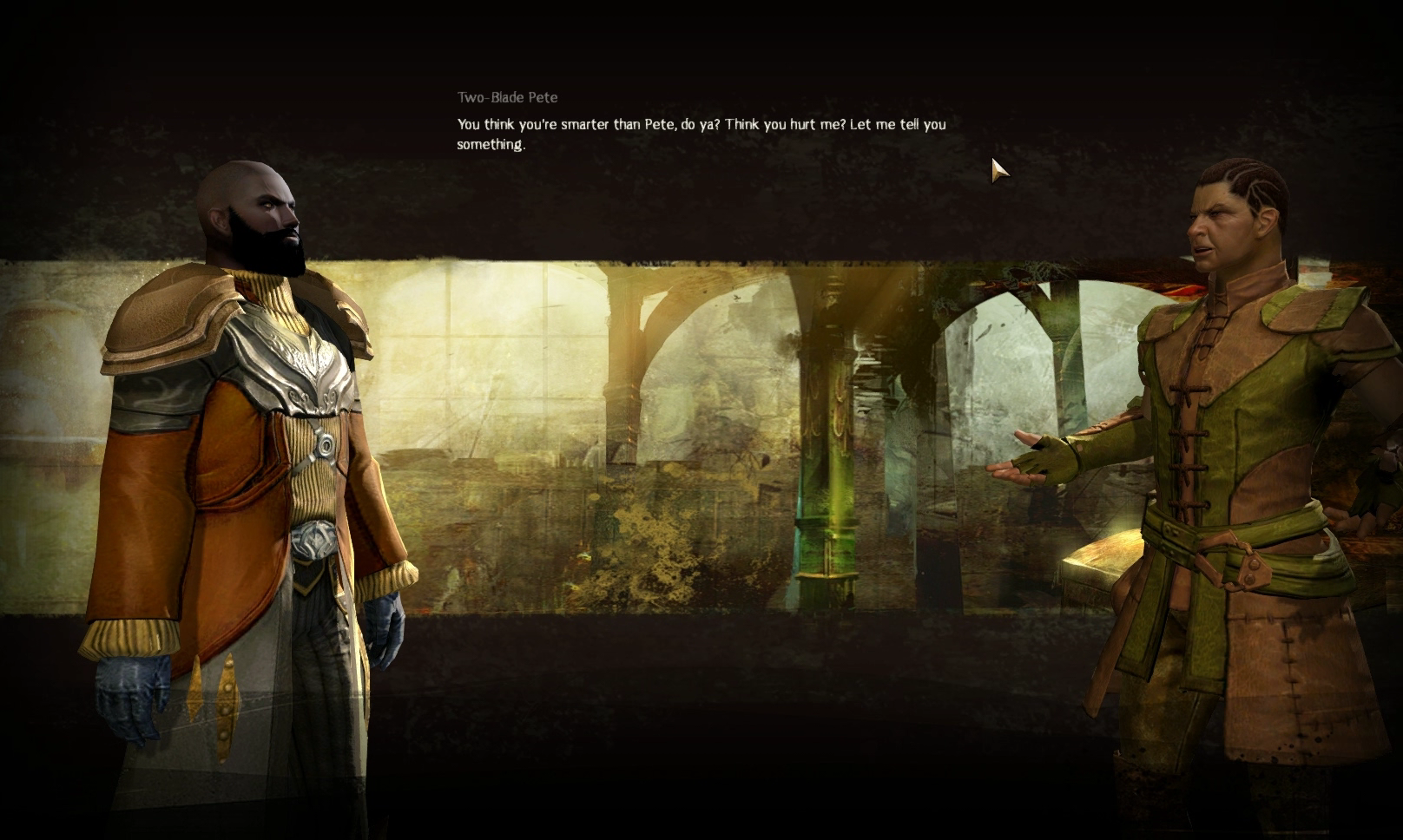 This walkthrough guide covers the Human storyline quest, Breaking the Blade, in the mmorpg Guild Wars 2. This quest is in part 1 of the Human storyline, Crime and Punishment and is available only to those with the Street Rat character background.

Breaking the Blade is the final quest which is in part 1 of the Human storyline in Guild Wars 2, for those with the Street Rat character background. Depending on the previous mission you chose to undertake, either the Rescue where you saved Quinn or the Greater Good where you worked to save the town with the seraph, this quest plays out a little differently. Either way, the end goal and overall flow of this quest is the same; it’s time for Two-Blade Pete and his bandit gang to be wiped out once and for all.

Stop Two-Blade Pete before he gets his revenge.
1. Talk to Logan at the Divinity’s Reach tavern.
The first bit of the quest is going to be some basic travel and conversation tasks. You can travel to the Salma waypoint in Divinity’s Reach to get directly outside the instance for the Salma District which you’ll need to enter first.

Once in the instance, a green map marker and arrow path will direct you to the tavern near the center of the district, where Logan awaits inside, talking to the bartenders. Talk to him to let him know you are ready and Logan will make some mention of whichever course of action you took for the previous mission.

2. Defend the tavern until Two Blade Pete arrives.
So the plan here is that Logan and his seraph are going to hide in the tavern while you fight waves of bandit attackers, in an attempt to draw Pete himself out as they themselves try to exact revenge upon you for foiling their previous plans. If you chose to rescue Quinn for the previous mission, he will join you in this part of the fight making him a helpful, however unnecessary addition.

Before any fighting begins, but shortly after the objective shows up, Riot Alice breaks in with a cinematic dialogue with your character, warning you of the coming bandits, letting you know that she left their group and showing appreciation for convincing her to leave. Sort of ridiculous if you consider you never talked to her again after Going Undercover, when the two of you just mentioned leaving the bandits almost in passing… and she thought you were someone completely different thanks to a disguise you were wearing at the time….

There are just two waves of Bandits to face here. The first will be your 3 of your general mix of regular Bandits, with the second wave consisting of another 3 Bandits, but this time with either Doc Howler or Crusher Dan in tow. Which Veteran character you face depends on which one you already faced and killed in the previous mission. Expect a lot of poison attacks.

3. Defeat Two-Blade Pete
Once the second wave is downed, Pete himself strolls in and starts up with the intimidation, however becomes notably shaken once your character makes it clear just how many of his men you have killed. After a brief cinematic dialogue, Logan and a couple Seraph spring out of their hiding places to help with your battle with Pete who is alone.

While Two-Blade Pete is of the Champion variety and 2 levels higher than you, his heats are comparitvely weak for this rank of npc. In addition, the assistance from Logan and the Seraph, not to mention Quinn if you saved him, makes this fight a cakewalk.

<— Previous Quest: The Rescue or The Greater Good
—> Next Quest: Depends on background.