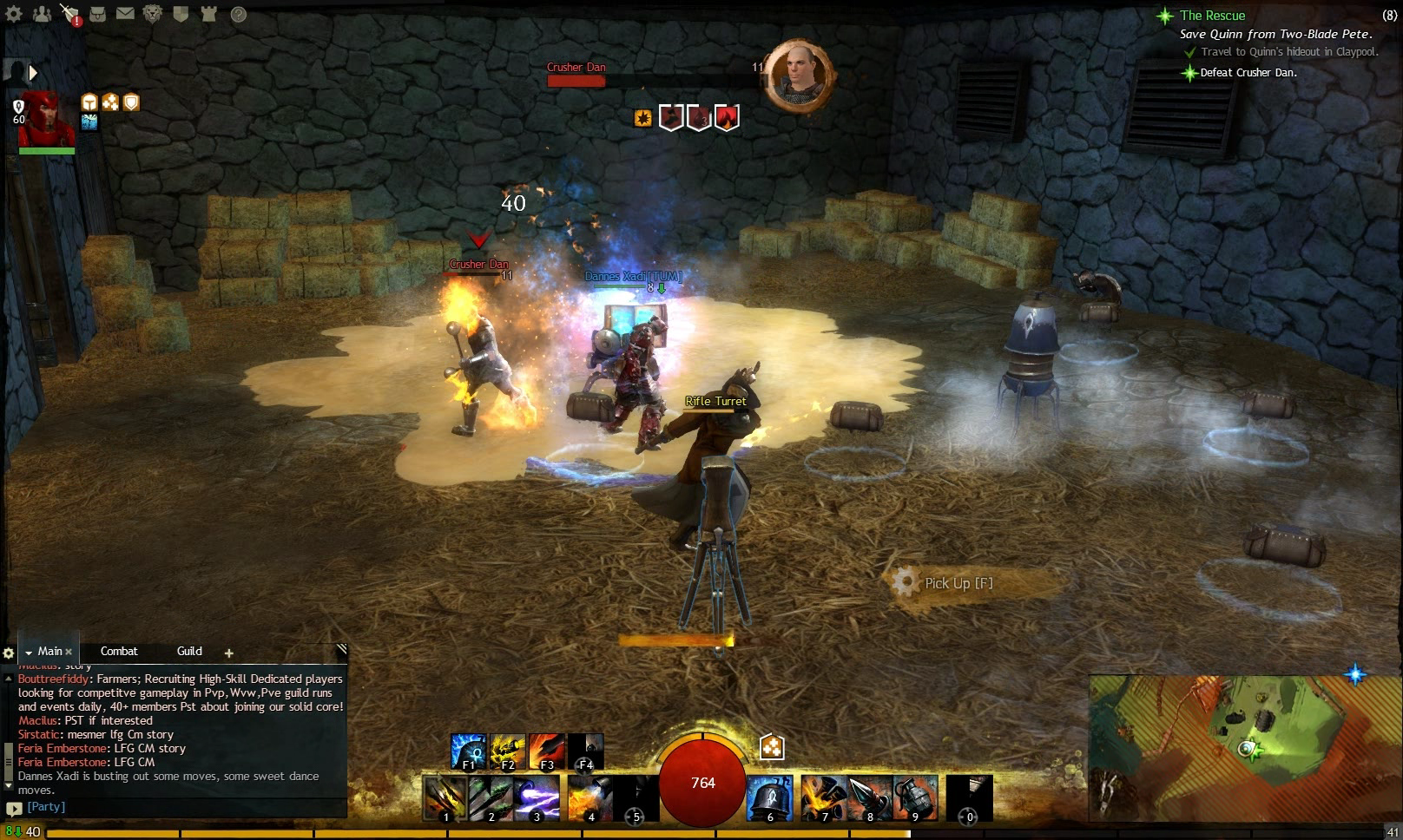 This walkthrough guide covers the Human storyline quest, The Rescue, in the mmorpg Guild Wars 2. This quest is in part 1 of the Human storyline, Crime and Punishment and is available only to those with the Street Rat character background.

The Rescue is one of two possible quests players can perform in this part of the story line, dependent on the choices made in the previous quest, this being the result of choosing to save Quinn’s life as opposed to helping the seraph defend the city. Your character has gotten word that Quinn’s Hideout has been discovered by Two-Blade’s gang, and their knowledge of his assisting the authorities against the bandits, means he is a prime target for retribution.

Save Quinn from Two-Blade Pete
1. Travel to Quinn’s hideout in Claypool.
Upon starting this mission, you will be tasked with travelling to the township of Claypool which is a moderately sized settlement located in the southwestern region of Queensdale, notable for it’s collection of profession trainers. The northern gate of the city will have an instance marker, which will take you to a special instanced version of the town for you to perform this quest in.

Quinn’s Hideout is going to be the stables in Claypool, which are located at the southern end and will be marked on your mini map. Approach the building and enter through the front to encounter Crusher Dan about to lay into Quinn.

2. Defeat Crusher Dan
After the cinematic conversation between the two is over, you are going to have to fight and kill Crsuher Dan in order to save Quinn as the later cowers in fear throughout the coming combat.

Fighting Dan isn’t too difficult, with him fighting as a Mace wielding Warrior. The one thing to look out for during the fight is Dan’s ability to Daze the player which will prevent you from using skills for a short period of time. Other than that and a relatively high hit point pool, the fight with Dan is rather uneventful.

3. Escort Quinn safely to the city gates.
After you’ve downed Crusher Dan, Quinn breaks out of his cowering state and actually starts to lend you a hand as waves of Bandits come to attack the two of you, 3 of them at first while you are still in the barn. The Bandits will consist of a mix of Cutpurses, Highwaymen, Thugs and Scouts.

This first wave is followed by a second group of 3 which come to fill the space of their fallen brethren, with the general populace of the town now running around in a panic due to the now impossible to ignore bandit presence and fighting. Once this wave is gone you can start heading to the northern gate you instanced in from to lead Quinn out, while also presented with a quick dialogue with him and the chance to raise your Dignity or Ferocity.

Further north will be a group of 5 or so Bandits engaged with the Seraph guards of Claypool whom you should help out to shift the odds and secure some assistance for the next group. After this is one last group of another 5 Bandits which block the exit of the town and preventing you from getting Quinn out safely. If you don’t want to engage all 5 at once, you can try either pulling a couple at a time which is possible due to their separation, or kite them back to the guards you helped earlier to have an even easier time wiping up this nuisance.

Once you’ve finished up the enemies a final cinematic dialogue begins between you and Quinn, with him thanking you for your help and your character’s mention of the next step in the plan, finishing off Two-Blade Pete.